Don’t Delay Club Foot Treatment for Your Little One

Bathing, diapering, night feedings—there are plenty of things to worry about when a baby is born, but a physical abnormality is one of the biggest concerns. While many abnormalities in the feet and legs will resolve themselves over time as the child grows, one condition usually needs to be treated soon after birth. Unlike in-toeing or out-toeing, flat feet, and bowlegs, club foot will not usually go away on its own. Fortunately, this condition is not painful for your baby and the treatment is fairly simple.

This deformity is congenital, which means it is present at birth. The exact cause for it to occur has not been identified, although it seems to run in families, and it has been linked to the presence of other skeletal abnormalities like spina bifida. Additional factors associated with the condition have to do with the environment during pregnancy, such as having too little amniotic fluid, getting an infection, smoking cigarettes, or using illicit drugs. It is also more likely to occur in males. 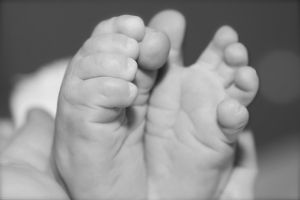 The condition is usually diagnosed at birth by its appearance. The baby’s foot is turned down and in toward the other leg, and the sole is tilted up—sometimes so far that the foot almost seems upside down. There may be a pronounced arch to the foot, and it may be a half inch shorter than the other foot. Usually the calf muscle in that leg is not fully developed, either. Often the Achilles tendon may be too tight or short. If it does not extend and grow out during treatment, it may later need to be released.

These conditions are not a problem until your child later tries to walk, but by that point it is too late to correct them. It is better to begin treatment right away, so that future problems can be avoided.

How Is Club Foot Treated?

A process called serial casting (or the Ponseti method) is the normal treatment method for club feet and it is started in the first few days. We would manipulate your child’s foot into a more natural position and then apply a cast to hold it there. A few days later, the first cast is removed and the foot is straightened again with another cast. This is done repeatedly for 6 to 8 weeks until the foot is in a good position. The final cast is worn about 3 weeks, and then your child will wear a brace for a further 3 months. After that, the brace is worn at night and during naptime for up to 3 years.

It is important that this treatment is carried out by professionals who fully understand all the muscles and ligaments in the feet and how they work together. That is why the podiatrists at Atlantic Foot & Ankle Associates are so valuable. They can monitor your child’s progress to make sure he or she is developing normally. They also have the expertise to do any surgical procedures that are necessary if your child is one of the 5 percent of club foot cases that do not respond to non-surgical remedies. With proper treatment, we can help your baby’s feet to develop well, so he or she can walk and run normally as other children do.