by Andrew B. Green 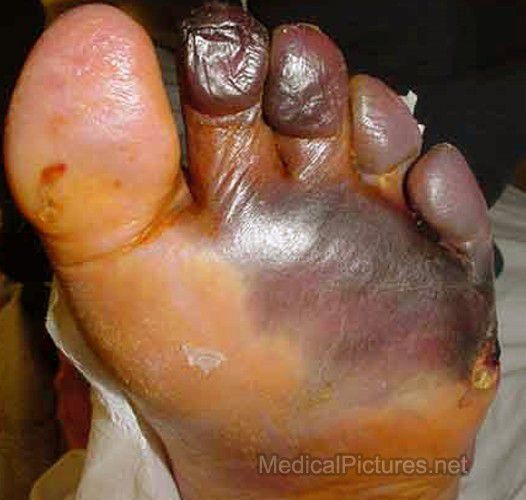 Recently, a Kenyan collegiate runner in Alaska suffered severe frostbite and had to have both of his feet amputated.  A severe consequence of frostbite that often leads to amputation is gangrene.  However gangrene is not limited to frostbite.  Gangrene also occurs in the feet of diabetics.

There are two major types of gangrene: dry and wet.  Dry gangrene occurs with diminished blood supply to a particular area.  Wet gangrene most often occurs when a bacterial infection affects blood flow.  Gas gangrene is a subset of wet gangrene in which anaerobic bacteria produce gas and poisons.

Symptoms of gangrene include a red line that delineates the gangrenous area from the healthy area.  Dry gangrene will become discolored, starting as a pale color and progressing to brown then black.  In wet gangrene including gas gangrene, the affected areas may feel heavy or painful.  As well there may be pus or a foul discharge as well as bubbles of gas noticed under the skin.  In wet gangrene, the skin may first appear blistered and red and then become brown or black.  Other symptoms include fever, loss of appetite, diarrhea, confusion, malaise, and low blood pressure.

Often with dry gangrene, the affected part will slough off or the affected part will be surgically removed.  Gas gangrene is much more of a serious medical situation.  Surgery and antibiotics will have to be administered promptly in order to stop the spread of infection.   In some cases the area may be exposed to hyperbaric oxygen in hopes to increase oxygen in the bloodstream and therefore to the affected area.  If the gangrene is allowed to progress to the point of the death of the affected tissues, often amputation will have to occur to remove the dead tissue.

We see a large number of diabetic patients at Atlantic Foot and Ankle Associates with locations in Daytona Beach, Orange City, Palm Coast, and Port Orange, Florida, and encourage them to inspect their feet every day.  Conserving good oxygenation and blood flow can prevent gangrene.  In the case of diabetes, ensuring a controlled blood glucose level and monitoring feet can also help avoid gangrenes.